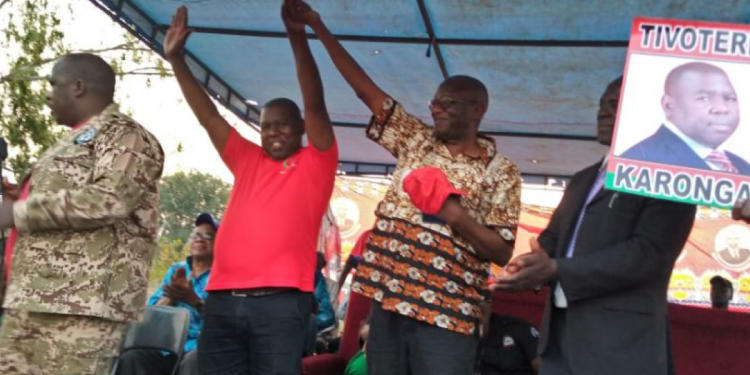 Acting group village headman Lupembe of Paramount Chief Kyungu in Karonga diatrict on Sunday was the biggest winner on behalf of the surrounding community members when he got instant responses to his developmental needs from the Malawi Congress Party (MCP) national director of youth Richard Chimwendo Banda.

GVH Lupembe hit the jackpot when he was given an opportunity to offer welcoming remarks at Chinsogholo school ground during a political campaign rally jointly organised by MCP, Alliance for Democracy (AFORD) and Citizen for Transformation (CFT) aimed at garnering votes for MCP shadow candidate Leonard Mwalwanda in the forth coming Parliamentary by-election.

In his remarks, the GVH did not beat about the bush but went straight to the point whereby he asked government to come to the rescue of the community to provide iron sheets, timber and nails to a school block, the headmasters office at Chinsogholo primary school and an Admarc depot the community constructed few years ago at Lupembe..

Said Lupembe: Traditional leaders initiated various developments at this school. We constructed a classroom and an office. However, we failed to roof these two buildings due to financial challenges. The school block requires about 100 iron sheets, timber, roofing nails while the office requires 46 irons sheets.

“Mwenilupembe 2 village has unfinished Admarc depot that also needs 80 iron sheets and about K300, 000 for labour. We have done our part and we ask government to do the remaining part.

In his response, Chimwendo Banda instantly gave out the K300, 000 for labour for the Admarc depot and promised to bring within the week the iron sheets enough for the school block, headmasters office and the Admarc, saying time has come for the people to enjoy governments development agenda.

“We are the Presidents eyes and ears. That is why we are here to drum up support for Mwalwanda so that once he is elected on November 10 he should be channeling your needs to government. Therefore, vote for him if you want your challenges to be timely sorted out, Chimwendo Banda said.

Chimwendo Banda who is also Minister of Homeland Security issued a stern warning to politicians who are allegedly using the youth to block passage for other shadow Parliamentarians.

The warning came against reports that on Saturday evening, some unknown thugs blocked passage for the MCP aspirant Leonard Mwalwanda at Lughali.

Taking his turn, CFT commander in-chief Timothy Mtambo told thousands of electorates who filled to capacity the school ground that his black attire symbolizes liberation from hard times to freedom, saying it is that attire that fought the Democratic Progressive Party (DPP) through series of demonstrations.

Said Mtambo: Comrades, I cannot come here to tell you lies. I am convinced beyond doubts that Mwalwanda is the only hope for your problems. Mwalwanda is a development conscious person. These other candidates have been tried before and failed miserably to develop this area, that is why the chief boldly asked for help and immediately got the help.

At the function, led by AFORD vice president for the north Green Lulilo Mwamondwe donated 100 rolls of MCP wrappers for campaign.

At the rally, Mwalwanda who was also joined by his contender at the MCP primaries Ellium Simwaka.

Mwalwanda promised three ambulances within nine months of his office if elected that will be stationed at Mlare, Lupembe and Mwenilondo health centres to ease mobility of patients.