Zimbabwe promises to support Malawi as next SADC Chair 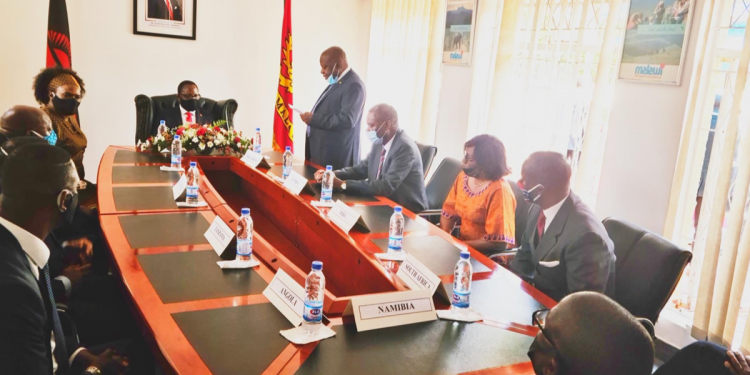 President Emmerson Mnangagwa of Zimbabwe has assured president Lazarus Chakwera of Malawi that his country will fully support him as he takes over the chairmanship of the Southern Africa Development Community (SADC)in August next year.

Speaking during the state banquet he prepared for visiting Malawi’s state president on Wednesday evening, Mnangagwa started by saying his ZANU PF is always thankful to Malawi Congress Party for giving the first Land Rover way back around 1960s. He then said the two countries are facing numerous challenges that need working together adding that his country is keeping over 5 million Malawians which shows the two countries are sisters. He further said as countries which were once under federal governance, do take no apologies for reclaiming their own land.

On fresh presidential election which was held in Malawi, Zibabwean leader congratulated Malawians for conducting free, fair and peaceful election without international observers saying the gesture displayed by Malawi leaves him to question whether African countries need observers from overseas whenever they are holding elections.

Taking his turn, Malawi’s president, Lazarus Chakwera thanked president Mnangagwa and people of Zimbabwe for the warm welcome accorded to him and the entire delegation. He added that he is so grateful that Zimbabwe helps Malawian citizens passing the country at all times, saying it is an indication that the two countries are standing together as one. Chakwera added that Malawi and Zimababwe stand a better chance of reaching more mutual agreements that can see them prospering together.

President Chakwera has since invited Mnangagwa to visit Malawi, saying the people of Zimbabwe have been good to the delegation and people of Malawi.

President Chakwera is on a 2 day official visit to Zimbabwe.