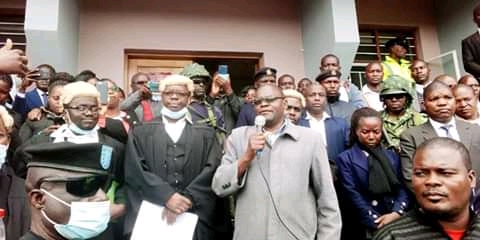 The Human Rights Defenders Coalition (HRDC), Women Lawyers Association (WLA), Youth and Society (YAS) and NGO Gender Coordination network have threatened to take government to court for disregarding Gender Equality Act when coming up with the reconstitution of the 67 parastatal boards

In a letter released yesterday Sunday, addressed to the Secretary to the President and Cabinet, copied to the Attorney General and Parliamentary Committee on Public Appointments and signed by the clients’ lawyer Wesley Mwafulirwa, of Kawelo law company says the government grossly violated several statutory laws such as the Gender Equality Act, Environmental Management Act including the Constitution in the Parastatal organizations appointments, as it disregarded more women in the Parastatal boards.

Mwafulirwa for example says, his clients did gender demographic and found that in Environmental Authority board composition for example, out of the seven members, only two are women.

Mwafulirwa contended that, such less women is Against wording of section 10, subsection 1a of the Environmental Management Act which provides that the gender composition of the Authority shall not be constituted of more than 60 percent of one gender.

Mwafulirwa further argues that according to one of his clients analysis, NGO Gender Co-ordination Network, the representation of women in the boards falls short of meeting the legal and policy framework obtaining in Malawi according to them, For example, over five Boards do not have any female. The attached analysis further shows that only about 11 out of the 54 boards analysed have no gender being more than 60% of the other gender.

Further, of all the 67 boards only 7 have female chairpersons.

Mwafulirwa was quick to remind the government that the Gender Equality Act was enacted to fulfill the Constitutional obligations, which demands equitable distribution of appointments of both gender.

Meanwhile, the four, HRDC, WLA, YAS and NGO Gender Coordination Network have since demanded the reconstitution of the Parastatal boards within seven days, failure which they will not have an option but to drag government to court.

Government is yet to comment on the matter, to argue for or against the claims.

Government reconstituted the boards on September 23 2020.