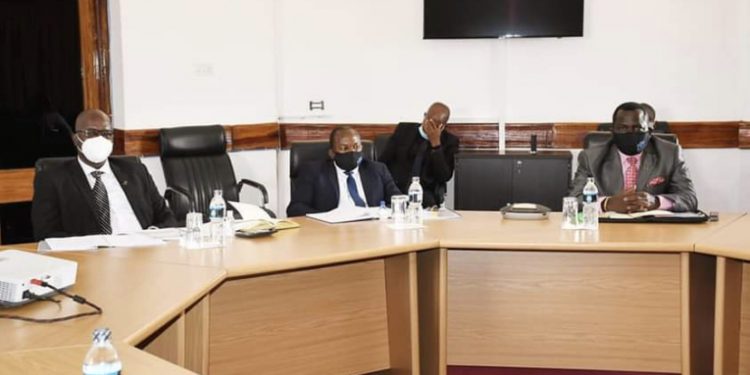 …I HAVE TOLD THEM TO RESIGN – CHILIMA

Vice President Saulos Chilima on Wednesday sent back Malawi Institute of Management (MIM) bosses over a poor presentation on reforms and the Malawi Veep described the presentation as the most uninspiring since he resumed his public sector reforms role.

The meeting was organized to appreciate the strides MIM is making in the implementation of public sectors reforms aimed at making their institution efficient and effective.

Writing on his Facebook, Chilima said he stopped the MIM bosses halfway through their presentation and told them that he did not have time to waste and they should meet again when they are prepared for a discussion meant to perfect an organization.

“I sent them back to fully prepare and let us know when they are ready.

“Suffice to say that MIM’s presentation was the most uninspiring portrait of an organization since I resumed working on public sector reforms under the administration of His Excellency Dr. Lazarus Chakwera, President of the Republic.

“If this is an institution that was established to train top civil servants then as it stands, the institution is
not up to the task under its current leadership,” said Chilima.

He noted that MIM is an organization that is being run down and from the institution’s financial presentation, one can tell that the organization is on its deathbed.

“I have been told that the institution has experienced persistent cash flow challenges resulting into lawsuits; and suppliers refusing to offer them goods and services as well as accumulating arrears in taxes and pension
contributions.

“With this obtaining, I expected the Executive Director to be in control of the situation and explain what has led to the current state of affairs and possible solutions being lined up to turn around the situation.

However, it seemed the ED did not have any idea how the institution has found itself in this situation, three years after being at the helm,” said Chilima.

Chilima has since advised the MIM bosses to prepare for a proper presentation or if they are not up to the task, to resign and go home.

Chilima who is also Minister of Public Sector Reforms has been meeting management of various public institutions to appreciate the reforms being implemented.