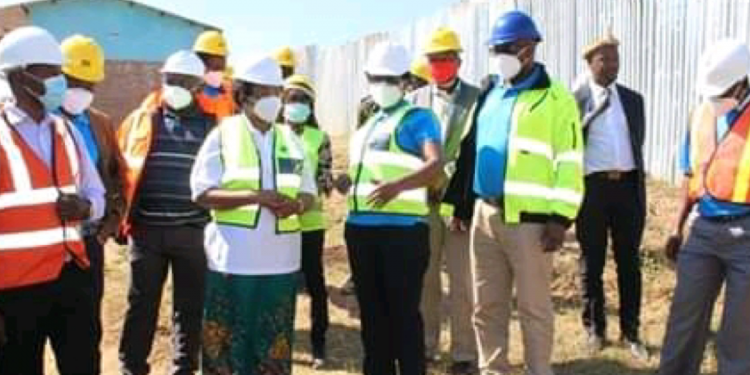 Over two thousand households in Mzuzu City are set to benefit from the 24.5 million Euros, Water Efficiency  project currently being implemented by the Northern Region Water Board.

This has been established during a visit to the construction site by the Minister of Forestry and Natural Resources, Nancy Tembo.

The project which is being financed by the European Investment Bank (EIB) is aimed at sustaining water supply in Mzuzu City and Ekwendeni Town as a stop gap measure while Government is sourcing funds for construction of the proposed Lambilambi Dam in Chikangawa Forest.

Speaking to Malawi Metro, Tembo expressed satisfaction with the progress made so far.

“I am very impressed with what I have seen here and this is recommendable work Northern Region Water Board is doing” Tembo said.

The Minister further hailed the Board for being innovative despite facing some challenges in the supply of water to the growing population of Mzuzu city and surrounding areas.

In his remarks Northern Region Water Board Chief Executive officer, Engineer Titus Mtegha said the board is geared up to address water challenges the region is facing.

” We have a number of projects ahead as one way of satisfying our customers here in the North,” Engineer Mtegha said.

The CEO further explained that with increase demand for water, the board has to think outside the box. The aim of the project is to rehabilitate, upgrade and extend the existing Mzuzu and Ekwendeni Water Supply systems so that the communities of Mzuzu City and Ekwendeni town plus surrounding areas are provided with adequate potable water supply.

The projects specific components include implementation of water demand management measures to reduce non-revenue water from 36 percent to 20 percent by the year 2022, rolling out of 15,000 prepaid water meters, among others.