by Chaweya Mzembe
in News, Sports
0 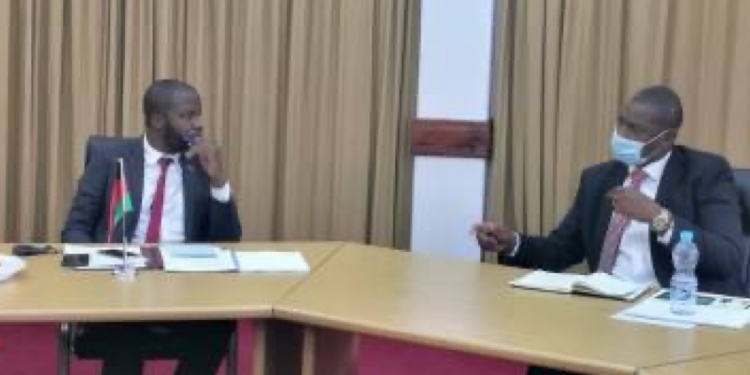 Football Association of Malawi (FAM) on Wednesday held a meeting with the Minister of Youth and Sports Ulemu Msungama on possible resumption of football which was suspended in March due to Covid-19 pandemic.

The FA was led by its President Walter Nyamilandu who was accompanied by the General Secretary Alfred Gunda.

According to the information made available to Metro Online, the FA was hosted by the ministry as part of consultation meetings with key stakeholders in-line with the road map which the ministry has produced.

“The Ministry has produced a roadmap for resumption of Sports and hosted FAM as part of it’s ongoing consultations with key stakeholders,” reads FAM’s statement.

On his part, Gunda described the meeting as a success, saying his Association remains hopeful of football resumption very soon.

“It was a very fruitful meeting as the minister wanted to hear from us on our preparedness to re-start foot all. He has assured us that the Ministry is engaging the Presidential Taskforce on Covid-19 on restarting sport in general and they will make a decision very soon,” he said.

Sports in the country was suspended in March following government’s decision to impose an imminent ban on all public gatherings.

The FA has been engaging government to try to resume football in October, with measures put in place to avoid further spreading of the virus which has registered 5474 cases with 3084 recoveries and 173 fatalities.

On Friday, FIFA and CAF released fixtures for the 2022 World Cup qualifiers and 2021 Africa Cup of Nations qualifiers in which Malawi will have back to back fixtures in November.

Failure to resume football will have massive impact on the Malawi national football team which relies on local based players who are currently not active due to the break.

The Presidential Taskforce on Covid-19 holds the key towards sports resumption in the country.