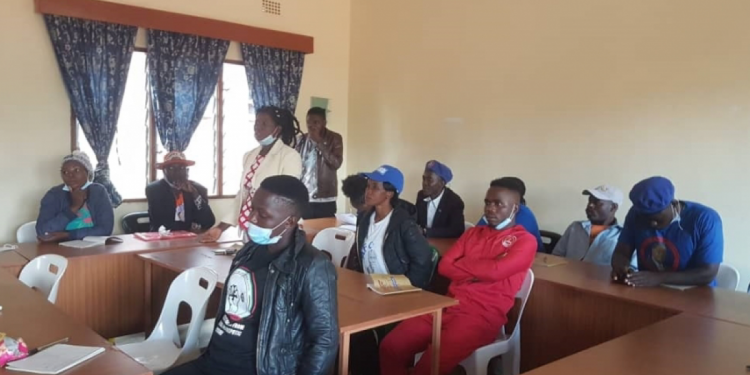 Political parties in the country have been urged to level the playground for young people to actively participate in the affairs of their respective political parties.

The call was made recently in Rumphi during an engagement meeting organised by Women Legal Resources Centre (WOLREC) between the youth and leaders of Malawi Congress Party (MCP) and United Transformation Movement (UTM).

Malawi Congress Party (MCP) youth member, Priscilla Munthali said the youth fail to actively participate in politics in their political parties because they are underrated and have inadequate knowledge on how political parties run their affairs.

“We are sidelined most of the time and seen as irresponsible people who cannot positively contribute to the affairs of the party. For instance, I was denied a chance to compete for a certain position in the party because I was deemed as two young for that position.

“I later insisted to participate and later they reluctantly allowed me to compete and won the seat,” said Munthali.

She said some political leaders do not run the affairs of their parties in a transparent manner and that makes the youth not to understand how political parties operate.

Munthali added that most young women lack interest to join politics because the society regards them as irresponsible. She further alleged that some leaders demand sexual favours in exchange for positions in the parties’ structures.

“Our culture has also to blame as it paints a negative bearing on young women who want to join politics because the society takes them to be prostitutes and people who cannot be trusted,” she said.

Rumphi Political Parties Forum (PPF) Chairperson, Afiki Mbewe who is alsoUTM Regional Youth Director for the north, concurred with Munthali and pledged to iron out the raised issues to ensure that young people are considered as asserts in politics.

“I am aware of the challenges that you have raised but let me assure you that we will table these issues once we meet at the political parties’ forum. We will make sure that such issues are addressed at district level.

“Political parties must start trusting young people with responsibilities instead of using them as agents of political violence,” Mbewe said.

WOLREC Programs Officer, Gift Mauluka, said his organisation was impressed with the openness by the youth in airing their political concerns at the meeting.

“I am quite happy with the team of young people we had here in Rumphi, they have been able to articulate issues that hinder them from actively participating in politics as everybody does,” Mauluka said.

He said WOLREC would be following up on the pledges committed by the parties to ensure that the youth, especially young women, contribute in the operations of various political parties.