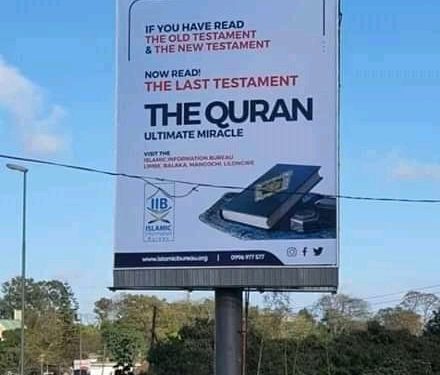 The Evangelical Association of Malawi(EAM) has written the Blantyre City Council to consider removing a billboard erected at Mselema, near Toyota Malawi in Limbe by alleged the Islamic Information Bureau.

In a letter dated July 28 2020, signed by EAM Chairperson Bishop Zacc Kawalala, addressed to the Blantyre City Chief Executive Officer and copied to Minister of Homeland security, Minister of Civic Education and National Security said the billboard which is bearing inscriptions that the Quran is a last testament has angered the EAM as the inscriptions on it have a potential of inciting religious violence in the country. It is tantamount to make a comparison between a Bible and a Quran.

The EAM further said the Blantyre churches are disturbed with the billboard.

Meanwhile, the EAM has since threatened that it will take unspecified action if the Blantyre City will not remove the said bill board within 7 days. One of the billboards which was erected in Blantyre by the Islamic Information Bureau has been torn apart yesternight by unknown people.