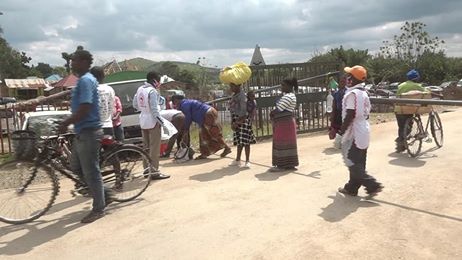 Some residents in the northern part of the border district of Karonga have expressed concern over lack of seriousness in observing preventive measures against the spread of the Coronavirus.

The observations were made during a tour by the Malawi Red Cross Society on its intervention
measures in high risk areas of the district.

Malawi Red Cross Society Communications Manager Felix Washoni told Malawi Metro News that in addition to volunteers already on the ground, the organisation will also embark on civic education in the district on the prevalence of the Covid-19 pandemic as well as preventive measures.

A visit to some of these areas in Karonga North has revealed that while residents are now observing preventive measures, some sections especially nearer to the border with Tanzania are neglecting the messages.

Thomas Mughogho, a trader at Kiwe trading centre, says the situation can be attributed to mixed messages about the pandemic with people from Tanzania saying the disease does not exist and he calls for more sensitization on the matter.

Despite not reporting any new cases since April this year in neighboring Tanzania, screening at the Songwe border post continues although observations show some people crossing from the
other side resist the preventive measures that have been put in place by the Immigration Department.