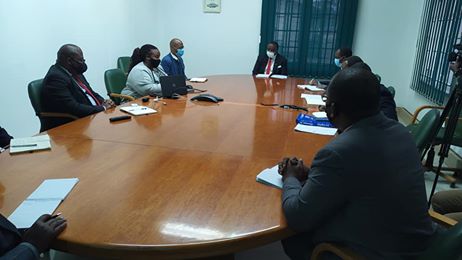 Illovo Sugar Malawi says plans are at an advanced stage to enter the energy sector as the company strategises to wean itself from being a net user and become an exporter of electricity to the national grid.

This has been disclosed by the company’s Managing Director Lekani Katandula on the sidelines
of a familiarization tour by Minister of Labour Ken Kandodo.

Kandodo said his Ministry is engaging key stakeholders in the drive to create a million jobs as
promised by the Tonse Administration. The Minister first engaged management of Press Corporation Limited and finished the day at Illovo Sugar group saying the two firms have a big role and potential to play in the process. He said the management talks helps to bring the two sides to a common ground on how this objective could be realised efficiently.

“Press Corporation Limited is one of the largest companies in Malawi who are employing a lot of
people through their subsidiary companies. We came to brief them on the 1 million jobs that this
Government is pursuing and see where they can fit in. We have been assured that the Press Group is going to support this initiative. We had a similar meeting with Illovo as you know
Illovo is another huge company employing over 14 thousand people but with yet another opportunity to create more jobs. We are also happy to know that they are considering diversifying into the energy sector which will also lead to more job creation in our country so the visit was really important,” said Kandodo.

On his part Katandula, said over the years they have been affected by power outages. He said this has had a negative impact on their business as such the company has taken an initiative to start producing electricity and export the excess to the national grid.

He said: “Consistent supply of Electricity has been our biggest challenge that is why now we are saying we shouldn’t just be spectators but we should be part of the solution. So we plan to set up a photovoltaic (solar) in Nchalo and also we’ll invest in coal and biogas. This will give us a total of over 40 megawatts that will suffice our energy requirements and export the excess to the national grid.”