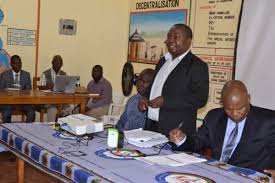 Three organizations, NICE, CCJP and FOCUS mandated to promote good governance, Human Rights and the Rule of Law, have condemned in strongest terms possible, the behaviours, practices and attitudes that have been demonstrated by the councilors of the Karonga District Council in the alleged illegal distribution of plots around Karonga main markets.

NICE, CCJP and FOCUS have called upon the Karonga District Council to immediately relieve all councilors mentioned in the Commission of Inquiry of any leadership position and discipline its staff reported to have not been issuing cash receipts to traders and remitting the collected revenue to the council, describing this as criminal offence that needs prosecutions.

The three organizations say they are shocked, saddened, disheartened to learn of the glaring fraud and corruptions and feel betrayed that the full council at its meeting of 11th July, 2020, validated these illegal acts saying this is a serious breach of people’s expectations and trust.

This is contained in the report that is co-jointly signed by Kossam Jomo Munthali, Executive Director of FOCUS, Louis Nkhata, CCJPS Desk Officer and christobel Munthali, NICE District Coordinator dated 20th July, 2020 with the subject; Insanity at Karonga District Council —A call to root out a culture of corruptions and fraud.

In the statement, NICE, CCJP and FOCUS commended the District Commissioner for Karonga for instituting the Commission of Inquiry to look into the unprocedural, unlawful awarding of contracts to same bidders who are doing Public Works for the council as well as provision of supplies.

NICE, CCJP and FOCUS say they have seen a copy of a report of the Commission of Inquiry which was presented to the full council meeting held on Friday, 10th July, 2020 which established that some councilors do not follow standing orders on the discharge of their duties, 80 maize vendors paid K30,000 each for distribution of plots to councilors; Smart Mwakayira, Ngasalaumo Mwangonde and Steven Simsokwe .

The three organizations have called upon the National Local Government Finance Committee, Ministry of Local Government, the Ombudsman, Malawi Police Service and the ACB to pay special attention to the report of the Commission of Inquiry at Karonga District Council and take necessary actions.

The organizations have also called upon Civil Society Organizations in Karonga district, stakeholders and people of goodwill to join hands in fighting corruption, fraud and irregularities at the Karonga District Council.

‘’We salute the Commission of Inquiry for a job well done , however, this revelation might be just a single case among others that have happened at the council. We therefore, call for further investigations in draining the swamp at Karonga District Council,” reads the statement in part.

NICE, CCJP and FOCUS have finally called upon all council members to wake up and say no to corruption, desist from dubious dealings and up hold the Rule of Law at the council in order to serve the people better and win their trust which is slowly being eroded.