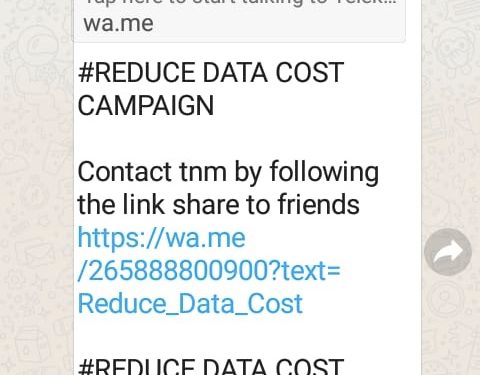 Reactions have been sparked online as Malawians
are demanding network providers to reduce data
charges.

The calls are being championed on social media
under the hash tags “datamustfall” and “reducedatacosts”.

At the moment, online users have mobilized
themselves to fight against what they dub as exorbitant costs of internet in the country.

Among other things, users online are asking authorities to urgently deal with the issue of expensive internet data bundles as it has negatively affected people as the use of the internet is becoming increasingly sought for.

Speaking to Malawi Metro News, some Lobbying social media Networks driving the campaign, said they find the costs of internet too high and yet the internet connectivity is not as good.

They also explained that they find the prices oppressive to a Malawian consumer because elsewhere internet prices have been revisited to allow people proceed with their day to day businesses through internet connections.

Meanwhile the activists claim that authorities and network providers fail to address the concerns; they
will seek other persuasive means until their demands are met.

The call also comes just days after Minister of
Information Gospel Kazako ordered the Malawi Communications Regulatory Authority to deal with the issue of exorbitant costs of internet in the country.

Meanwhile ICT Association of Malawi President
Bram Fudzulani says the demands are long overdue.
“As part of such calls, ICT players are currently
meeting with Macra as well as Competition and Fair
Trade to force the network providers to treat this
matter seriously, “said Fudzulani.

In its 2019 economic monitor review, the World Bank cited high taxation as one of the major factors
behind exorbitant internet charges in the country.

While stating that lack of competition in critical
telecom market segments restricts the growth of
the sector, the World Bank proposed the country to
have significant policy, regulatory and fiscal reforms
in order to realise digital dividends.

In 2018, Freedom House, a popular global organization that conducts research and advocacy on democracy, political freedom, and human rights stated that Malawians have to pay up to 44 percent in tax in order to access the Internet.

The organization also found that for the few users
who can afford the Internet, “connection speeds are frustratingly slow and have decreased to an average
of 1.3 Mbps in 2017 from 1.7 Mbps a year prior,
compared to a global average of 7.0 Mbps.”