by Salome Kamachawe
in National, News
0 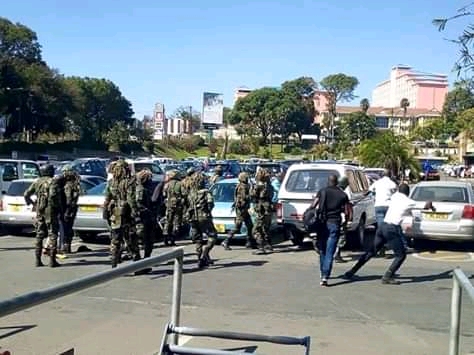 Rumours have gone viral on social media that junior Malawi Defence Force soldiers are not happy with the way self-upgrading soldiers are promoted and considered for officer cadet trainings.

According to a letter dated 18th July, 2020, speculating on social media, the soldiers have complained against lower ranks contrary to their academic achievements. The letter which has been addressed to the Office of the Vice President, who is also the Minister responsible for Economic Planning and Development and Public Sector Reforms, Dr. Saulos Chilima, seeks government change in the way junior soldiers are promoted when they upgrade their education so that they are promoted in the same way other civil servants are promoted.

In the letter, the soldiers have argued that for about 12 years, self-upgrading soldiers have been sidelined in terms of promotions and trainings. They said when soldiers go back to school and attain university degrees, they are not given commissioned officer ranks but instead junior ranks equivalent to lower grades in the Civil Service.

“We are about 70 self-upgrading soldiers that have not been promoted to the rank of commissioned officers despite rendering our degrees to relevant authorities. Instead we have been given junior ranks which are equivalent to lower grades in the civil service”, they said.

For example, they said some of the graduates are serving under rank of sergeant which is equivalent to grade K in the civil service instead of grade I. The concerned soldiers have also appealed to government to cross check the academic qualifications of officer cadets who are currently doing their training at Malawi Armed Forces College (MAFCO) in Salima. They said most of the chosen candidates currently in MAFCO are not qualified and that well deserving soldiers have been left aside.

“What surprises us most is that in March 2020, we were asked to apply for mature entry but we were shocked that instead of inviting us for training, only few graduates have been called and the majority of those who have been called for their papers are questionable.” reads the letter.

They have, therefore, requested government to suspend the 2020 officer cadet intake with immediate effect and consider inviting those who applied for mature entry arguing that this would also be cost effective.

“We strongly believe that it is even cheaper, to train officer cadets who are in service than fresh graduates. For your own information, for the mature entry, it only takes 6 months while training for fresh graduates takes a period of one year plus. This can therefore be a cost saving service”, they said.

Having seen the significance of formal education in Military, many secondary school soldiers are going back to school, a majority of whom are doing good and attaining their first university degrees.