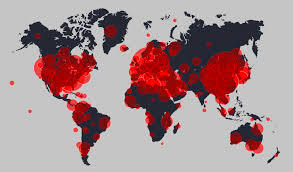 South Africa on Saturday reported 13,285 new
confirmed cases for a total of 350,879. That puts
the country ahead of Peru and makes up roughly
half the cases in Africa.

The only four countries with more confirmed cases
— the U.S., Brazil, India, and Russia — all have far
more people than South Africa’s 57 million.

The virus arrived on the continent a little later than
elsewhere, giving officials more time to prepare, but
Africa has fewer health care resources than any
other region and South Africa’s public hospitals
struggle to handle the growing number of patients.
Gauteng province, home to Johannesburg and the
capital, Pretoria, is now Africa’s epicenter for the
virus. It has one-quarter of the country’s population
and many of the poor are crowded in township
areas with inadequate access to clean water and
sanitation.

South Africa has seen 4,948 reported virus deaths,
but the South African Medical Research Council in
its most recent report shows the country had
10,944 “excess deaths” between May 6 and July 7.
So far, according COVID-19, including
593,087 deaths.