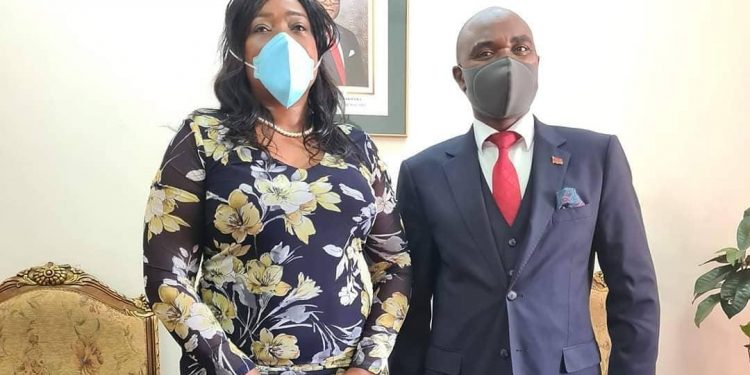 0
SHARES
44
VIEWS
Share on FacebookShare on TwitterShare on Whatsapp

Hon. Eisenhower Mkaka M.P., Minister of Foreign Affairs and International Cooperation, today had a one on one chat with Heads of Diplomatic Missions and selected International Organisations.

The Heads of Diplomatic Missions paid courtesy calls on the Hon. Minister in order to introduce themselves to him as a way of creating working relationship and chart out Malawi’s foreign policy priorities.

Among other things, Hon. Mkaka assured the Heads of Missions and International Organisations that the Government of His Excellency Dr. Lazarus Chakwera is looking forward to working with each one of them in order to build a new Malawi.

He added that the current administration will provide a good environment for investments. “We want all projects that you have lined up for Malawi to flourish and thrive and you can count on us on continuity and implementation of policies for the betterment of Malawi and her people,” Mkaka said.

Taking their turns, the Head of Missions congratulated His Excellency Dr Lazarus Chakwera upon his election as the new President of the Republic of Malawi and the Honorable Minister for his appointment as the Minister of Foreign Affairs.

Their Excellencies also re-affirmed their commitment to work with the Malawi Government in its quest to strengthen democratic participatory governance and ensure sustainable socio-economic development in the country.