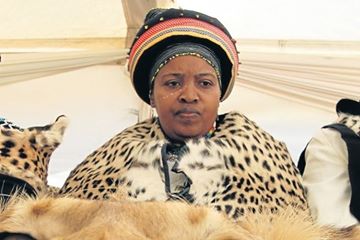 A royal family in South Africa has confirmed the death of Queen Noloyiso Sandile from Covid-19.

A sister to the current Zulu monarch, King Goodwill Zwelithini, she served as regent of the amaRharhabe royal family.

Queen Noloyiso was married to the amaRharhabe monarch, Maxhoba Sandile, for over two decades until his death in 2011.

She was then made the regent as her son, Prince Jonguxolo Sandile, was too young to become king. The 56-year-old had been admitted at a hospital for Covid-19-related complications, the public broadcaster SABC reported.

President Cyril Ramaphosa described her as “a bastion of traditional values and an inspiring and
principled leader of her people”. South Africa has seven officially recognised monarchs representing different ethnic groups and clans.