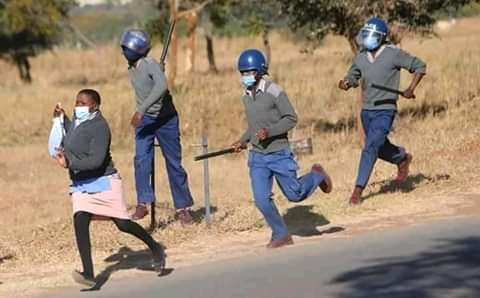 Zimbabwe police in capital Harare yesterday chased after nurses who are striking for improved working conditions, including salary increments.

The police were trying to force the nurses back to work a development that prompted a retaliation as they insisted to down their tools until their demands are met.

There were chaotic scenes in Harare yesterday, up to the removal of President Mnangwagwa’s posters in the city by the angry people.

The nurses also resolved to strike last year demanding salary increments, it took one of the Zimbabwean richest business man to pay the nurses on behalf of government.

Economic analysts in the country have blamed the government for causing this strike and said if the strike continues lives of many people will be at risk.

They blamed government for using forceful methods to get them back to work rather than paying a deplomatic role of engaging then in dialogue to map way forward.

The country in the third month of lockdown has suffered Economic woes since the deportation of white farmers during the late President Robert Mugabe regime a development that caused the economy to plunder into crisis due to economic sanctions imposed to them by the European countries.