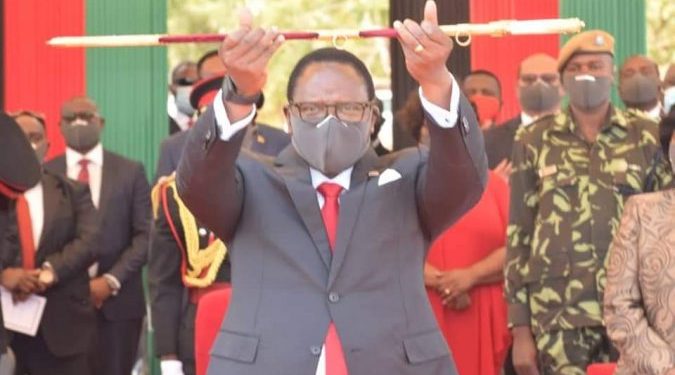 His Excellency the President, Reverend Dr. Lazarus Chakwera, has challenged Malawians to work hard saying, time of giving free handouts, rewarding noise makers and hand clappers who are too lazy to work, is past.

Dr. Chakwera advised Malawians that they have a country to build and not a moment to waste, emphatically calling them all to work hard for national development agenda.

He also said before Malawians begin to rebuild their country, they must clear the rubble of corruption, laziness, passiveness, donor dependence, regionalism, unprofessionalism and incompetence, saying he has made a vow and is bound to God to correct things such as the ruining of national treasures of both nature and State.

Speaking during his inauguration ceremony as Malawi’s 6th President of the Republic at the Kamuzu Barracks in Lilongwe, Dr. Chakwera says Tonse philosophy is of collective responsibility that brought Malawians to this milestone and is the same philosophy that will bring Malawians to the next.

Dr. Chakwera, received a sword of Command from General Peter Namathanga, promises Malawians that he will give the country his best and to do his best as their servant, setting a good example of submitting himself to the constitutional process, provisions and institutions that are designed to ensure that the President and his Vice President are always at their best.

He said as required by law, he will make a full declaration of his assets each year, and going to Parliament to be questioned by the people about his handling of state affairs.

“I will meet with the Leader of Opposition personally every 3 months to listen to alternative ways of running government affairs and operationalizing the Access to Information Act inorder to end the era of government secrecy,” he proposed.

The President proposes legislation to reduce the powers of the Presidency and empower institutions to operate independently, including Parliament and Anti Corruption Bureau ( ACB).

He also challenged the leadership of the Judiciary to do more to root out the culture of corruption and selective justice that has shipwrecked too many in Malawi’s lowest courts.

He challenged those who sit in Parliament to act professionally, put away childish ways, and repeal and replace the bad laws that remain in the country’s books.