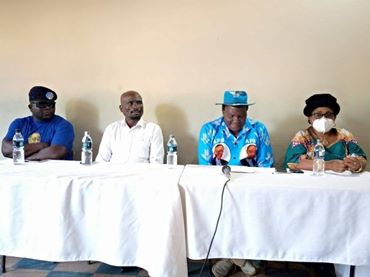 1
SHARES
17
VIEWS
Share on FacebookShare on TwitterShare on Whatsapp

Leaders of the former governing DPP are held a
press briefing in Lilongwe today.

The party says it is condemning what it calls political arrests being perpetuated by the current regime.

He says the country is being subverted into a land of political persecution and witch hunting.
According to Dausi, who is read the party’s statement, the arrest of Kambalame is political in nature.

Dausi has also wondered where civil society
organizations are at this time. He says this was supposed to be the good time for them to come out and fight for people’s rights.

However some political analysts have quashed out Dausi’s saying it’s never a political arrest by bringing to book people who abused tax payers money for personal gain and corrupt practices.

The analysts also blamed greedy politicians who they feel being witch hunted after embezzling billions of the country’s financial resources and praised the incumbent government efforts of recovering plundered resources by the DPP regime.

They also stressed that once found guilty of the alleged abuses they should be arrested to set a precedence to the he would be offenders without mercy citing it’s never fair to tamper Justice with mercy as far as public resources are involved.