Muluzi to be sued for abuse of tax payer’s money 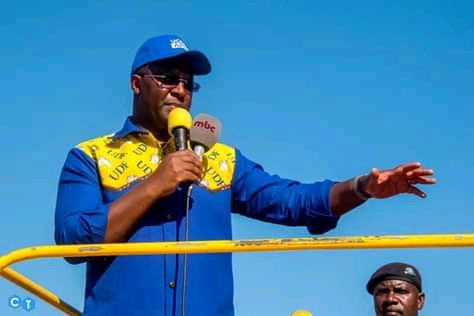 1
SHARES
59
VIEWS
Share on FacebookShare on TwitterShare on Whatsapp

The Human Rights Defenders Coalition (HRDC) has said it will send an invoice to United Democratic Front (UDF) President Atupele Muluzi for the use of a convoy sponsored by government.

Atupele, who was running mate to former president Professor Peter Mutharika who was leading the Democratic Progressive party (DPP)-UDF Alliance in the just ended fresh presidential elections was allocated a motorcade with a police escort vehicle and enhanced security during the campaign period.

Writing on his official Facebook page, HRDC Chairperson Gift Trapence said they are demanding payment for the use of a convoy sponsored by tax payer resources outside constitutional provisions.

“He also used State Security. All this was against the law. We expect the payment in full once our Finance and Administration Department finalizes the determination of the cost,” reads part of the statement.

Recentry, political and legal minds have described as “a waste of public resources” the allocation of a motorcade with a police escort vehicle and enhanced security to President Peter Mutharika’s running mate Atupele Muluzi.

Garton Kamchedzera, a professor of law at Chancellor College—a constituent college of the University of Malawi, told the local media that there is no legal basis to accord a Cabinet minister or presidential running mate such a privilege.

He said: “These are the sort of privileges and benefits accorded to the President and Vice-President under the Presidents [Salaries and Benefits] Act. If it has to be done, I cannot find any law that permits the use of resources. This sort of abuse of public resources and opportunity is an indication of a creeping self-centred dictatorship.

“This is because the President is requiring or allowing privilege and advantage for his running mate in disregard of the Constitution and the law in general.”