by Mandy Zinhle
in International, Sports
0 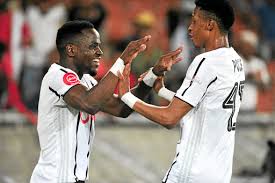 This season has seen Frank Mhango re-establish himself as one of the best players in the Premier Soccer League (PSL).

The Orlando Pirates forward is sitting at the top of the Absa Premiership’s goalscoring charts having impressively netted 14 goals from 17 starts.

The man nicknamed Gabadinho is already among the best Malawian players to turn out in the South African top-flight league since 1996.

Known for their work-rate and tenacity, the Flames (Malawi national team) players have definitely left their mark on the PSL.

We take a look at the top five greatest Malawian players in the history of the PSL:

The Kaizer Chiefs legend is one of the finest defenders in the history of the PSL having achieved greatness during his time with the Soweto giants.

In 2006, Mabedi left the Glamour Boys for Moroka Swallows where he spent two seasons, before he retired from professional football.

The veteran midfield maestro is considered to be a legend at Black Leopards, but he played his best football at the now-defunct Platinum Stars.

Ng’ambi joined Leopards in 2005 and he quickly became an influential player during his six-year spell with Lidoda Duvha, and he played a key role in helping the team finish as runners-up in the 2011 Nedbank Cup.

The former Malawi international was then snapped up by Stars and he played an instrumental role in helping Dikwena finish second in the Absa Premiership (2012/13 season), before they clinched the MTN8 and Telkom Knockout Cup in 2013.

Ng’ambi, who was named 2013 MTN8 Player of the Tournament, is currently on the books of Leopards having rejoined the club in 2018.

The Malawian legend joined Orlando Pirates in 2000 having already achieved legendary status at Bloemfontein Celtic and Mamelodi Sundowns, before the PSL era.

The former Welkom Real Hearts player, who was voted Footballer of the Year in South Africa in 1985, also won the PSL title in his final season (2002/03) with Pirates, before moving to Hellenic.

Mtawali then had a short spell with Ajax Cape Town in the twilight of his career, before he retired from professional football in 2004.

The Malawian star has made an impact at each club that he has played for in the PSL since he arrived in the country in 2013 and joined Bloemfontein Celtic.

Mhango narrowly missed out on the Absa Premiership Golden Boot award by one goal during his debut season (2013/14), before moving to Lamontville Golden Arrows in 2015.

The diminutive forward then moved to Bidvest Wits where he played an integral role in helping the team clinch the Absa Premiership and MTN8 double in his first season with the team.

Mhango also helped the Clever Boys clinch the 2017 Telkom Knockout Cup and he secured a big move to Pirates ahead of the 2019/20 season.

The Malawian legend played 12 successive seasons in the PSL as a reliable defensive midfielder between 1996 and 2009.

Maduka’s first South African club was Umtata Bush Bucks where he spent seven seasons as a key player, before moving to Zulu Royals (AmaZulu FC) following the former’s relegation from the PSL at the end of the 2002/03 campaign.

The former Malawi captain spent one season with Royals and he was snapped up by Bloemfontein Celtic where he played an important role in helping the team clinch the 2008 SAA Supa 8 (MTN8) as team captain.

Maduka hung up his boots at the end of the 2008/09 season and he was a joint recipient of PSL Chairman’s Award along with SuperSport United legend Andre Arendse at the PSL Awards ceremony in May 2009.