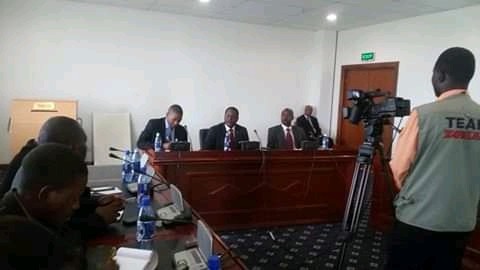 1
SHARES
21
VIEWS
Share on FacebookShare on TwitterShare on Whatsapp

Bwaila Media Club over the weekend held its Annual General Meeting (AGM) at Mponela in Dowa where, among others, it elected new office bearers.

The club also elected Andrew Massa as new Secretary General with Grace Kapatuka his deputy and Doreen Sonani is Treasurer.

The new Chairperson, who has taken over the mantle from Wisdom Chimgwede, has pledged to continue from where the outgoing Executive
Committee has left, especially on widening the club’s membership and mobilising resources.

In his remarks, Chimgwede appealed to journalists to ensure that they are apolitical and exercise professionalism when executing their duties.

“Journalists should remain neutral in their reporting,” he said.

Malawi Energy Regulatory Authority Chief Executive Officer Collins Magalasi, whose organisation has been providing financial support to the club, urged journalists to build their capacity so that they have a better understanding of issues.

The AGM was held under the theme Building a Sustainable Media Club for 2020 and Beyond. Bwaila Media Club is a grouping of journalists
based in Lilongwe in the Central Region.