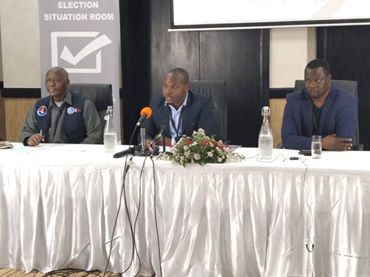 This is despite numerous attempts by stakeholders
to persuade the State broadcaster to remain
professional.

Chairperson of the consortium Boniface Chibwana
also faulted the Malawi Communications Regulatory
Authority (Macra) for failing to hold MBC accountable.
Chibwana briefed the media in Blantyre where the consortium gave its preliminary report on the fresh presidential election.

However, he said the private media has been
professional throughout the electoral process;
hence, must be applauded.

The consortium also observed that civic education
for the fresh presidential election was low.

Chair for the consortium Bonface Chibwana has
since recommend the need to device a solid plan that will establish readly available funding for civic
education.

They also observed that the public broadcaster-MBC displayed bias in their broadcast of information towards the fresh presidential election.

According to Chibwana, the broadcaster also aired some materials that had modified information with
an aim to de-campaign the opposition.

The consortium has since recommended the need to reform MBC and make it more autonomous.

They also find that the social media played a
double edged role ahead of the elections.

They said that while the platform was used to
provide quick electoral information, it was also a
huge ground for fake news.

Overall, the consortium find that the electoral process up to this point has been conducted fruitfully.

They have also commended security agencies for their professionalism in handling elections related matters to allow smooth elections process.