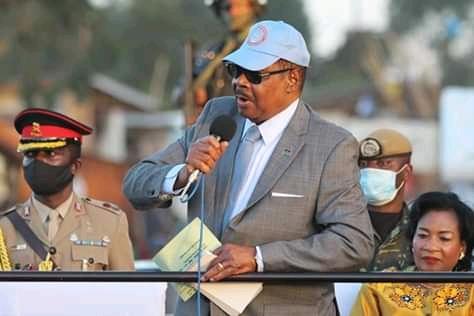 Democratic Progressive Party (DPP) and the country’s
President Peter Mutharika has condemned reports of violence in the Central Region and other parts of the country where people are being beaten and their property vandalised.

Mutharika expressed these sentiments after he cast his vote at Goliati in Thyolo.

He has laid the blame on the Malawi Electoral Commission (MEC) saying it is irresponsible after reports by the chairperson of the Commission yesterday saying that some presiding officers wanted to boycott opening of polling stations.

He said it is sad because (MEC) has an obligation to make sure the elections are credible.

“The Commission is being irresponsible in this situation,” APM told Journalists.

On the political violence Mutharika said: “It is very sad that this is happening and we know who is doing it, its obvious the opposition are doing this in the centre regions citing Nkhotakota incident as an example.

“It is very very sad that this is happening, I think we need to give the people, their will and they should not live in fear of harassment” he stressed.

The fresh elections are happening a year after the Constitutional Court nullified the elections of 2019 citing massive irregularities.

Mutharika has remained adamant that he won and claims he will win again this time.

This election is different as it will be decided using the 50 plus 1 majority vote as opposed to the previous past the post rule.