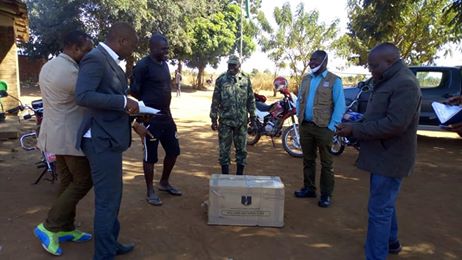 On Sunday Dedza District Commissioner
Emmanuel Bulukutu, Dedza Police Officer-In-charge Mabvuto M’bobo alongside DPP and MCP
representatives went to Mikondo border post in the
district to collect a MEC sealed box that the Police
found during a routine patrol.

It was discovered that out of the 52 boxes that Magomero nerve centre was supposed to receive
,one carton for the kabwazi centre was missing and
turned out to be the one found by the law
enforcers.

The sealed box has since been delivered to the
centre by the DC.

However MEC Chair person Dr Chifundo Kachale said the police are investigating on the matter and will provide relevant information as soon as possible.

He also assured the public’s that the box was found un tempered and it’s sealed state.

However, several political analysts have expressed worry over the development and have urged the law enforcers to quickly come out with what transpired so that public doubt should be removed.

Last year as the country awaited elections a Voter registration kit was found in a train enroute to Mozambique and no convincing explanation was given on the development.