MPs asks for postponement of Monday Session to go and vote 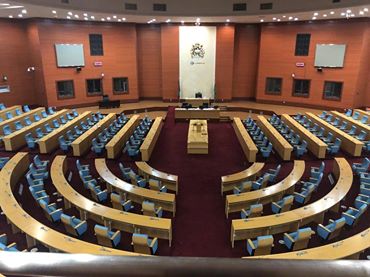 Parliament says it is consulting on whether the
House should proceed to convene or not this Monday 22 June as expected.

The sentiment comes as some Members of
Parliament have expressed concerns over the
meeting saying it will be difficult for them to travel
back to their constituencies to cast votes the
following day.

Meanwhile, Parliament Spokesperson, Ian Mwenye,
has confirmed in an interview with MIJ FM that the
Office of Speaker of the National Assembly has
received concerns on the Monday meeting and is currently consulting with the business committee of parliament.

According to Mwenye, MPs who have gone on clusters following budget presentation, are expected to meet and respond to the budget statement on Monday.

On the other hand, MEC Chair Dr. Chifundo Kachale says ballot papers have arrived today, Friday, at 11:35am at Kamuzu International Airport and the Malawi Defense Force will provide security at the airport.

Further, Dr. Kachale said political parties have been informed of the development and were asked to provide 10 people each to witness the arrival.

On transport logistics, Dr. Kachale says the UNDP has promised to provide trucks only if government
funds the whole election.