Burundi’s President – Elect, To Be Sworn in 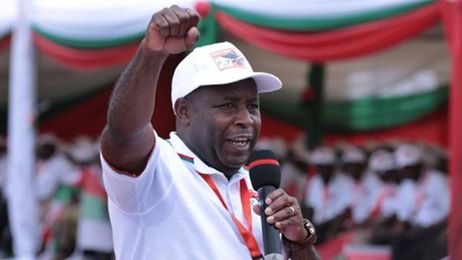 Burundi’s newly-elected President Evariste
Ndayishimiye will be sworn in on Thursday, the
Foreign Ministry announced, after the sudden death
of the incumbent forced authorities to expedite the
ceremony.

President Pierre Nkurunziza died last week aged 55,
of what authorities said was a heart attack. His death came less than two weeks after his wife had been flown to a Nairobi hospital for treatment for the coronavirus, according to a medical document seen by AFP.

The Foreign Ministry invited diplomats and foreign
organisations to “take part in the inauguration
ceremony” in the capital Gitega, in a letter sent out
on Monday.

Ndayishimiye, 52, a former Army General and Hutu
rebel, like his predecessor, had been handpicked by
the powerful ruling CNDD-FDD to run in a May 20
presidential election.

He won the vote with 68.7 percent, and an
opposition bid to have the results overturned due to
alleged fraud was overturned just days before
Nkurunziza’s death.