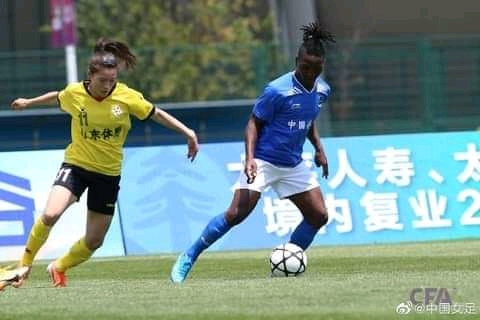 The 22-year-old now leads the scorers’ chart with six goals from three games, two ahead Li Ying of Shandong Ticai.

Her elder sister and teammate Tabitha had a strike in their latest victory to take her tally to two league goals.

The development means the sisters have so far scored eight of Wuhan’s 13 league goals this season.

Temwa had her first brace of the season over a week ago when Wuhan thumped Sichuan 4-0 in their league opener. She did it again in the second match that saw them thumping Shandong by the same margin.

“I thank God for the blessings,” said Temwa, who is in her second season with Wuhan and was the league’s second top-scorer with nine goals last season.

Tabitha, who has just joined Wuhan from Jiangsu to team up with her younger sister, is among top seven scorers in the league so far and is one of four players with two goals.

The Malawi women’s national football team captain said she is happy for her younger sister’s achievements in the Chinese league so far.