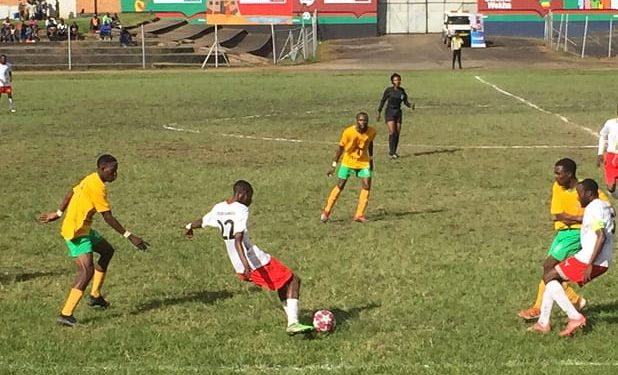 Ekwendeni Hammers returned to winning ways on Sunday as they beat Ntopwa 3-1 in the Tnm Super League at Mzuzu Stadium .

The game didn’t register any goal in the first half with Hammers missing a lot of chances.

In the second half, both sides came in with new tactics and Hammers were the first to see the back of the net through Chawanangwa Gumbo in the 55th minute.

Chawanangwa Gumbo getting man of the match award Ntopwa equalized six minutes later but Gumbo came back again with a beauty in the 78th minute and Clever Kayira sealed Ntopwa’s mouth with a third goal at the dot of full time to make it 3-1 to Hammers.

Chawanangwa Gumbo was voted Man of the Match.

In a post-match interview, Hammers’ Etson Kadenge said he was grateful to get a win after three games without a win.

“This win will motivate the team as we are traveling to central region to wind up the first round of the league,” said Kadenge.

Ntopwa FC owner and Team manager Isaac Jomo Osman said the players were not to blame them for the loss because there was an improvement in the way they played.

“We have lost five games but I am assuring you one day you will see the team winning games with the same players,” he said.

Osman added that people should expect to see new six faces in second round of the league.

The win moves Hammers to fourth position and they remain with two games to end first round of the league with 22 points, while Ntopwa have 14 points in position 11 in the Tnm Super League log table.