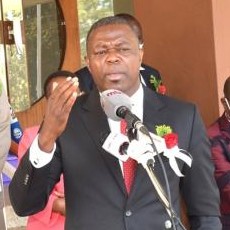 Minister of Information and Communication Technology, Gospel Kazako says there is need for proper audit in the ICT sector for the government to know investments and gaps within the sector.

He said this Wednesday in Blantyre where he visited Globe Internet to hold discussions on several developments, among which was the tapping of power from the fiber cable which is currently held by ESCOM.

Kazako noted that lack of audit in the sector as one of the big issues that needs to be sorted out to ensure that the sector is efficient and effective,

“The big weakness in this sector has been lack of audit. Government needs to know what it has, what it doesn’t have, who is using what and how they are using it.

“We believe in interaction and engagement. We came to literary find out what was happening,” said the Minister.

Kazako said government spent millions of dollars in the fiber that is being held by ESCOM and yet was not sure of the terms of reference that are there.

“We want to understand what is happening as we are doing this thing on behalf of people,” he added.

The Minister recommended that the ICT sector needs a lot of audit, a lot of recalibrating, a lot of changing the directions to ensure affordable and well capacitated ICT.

“This government is looking at ICT as crucial in a sense that it is an important tool to growing our Gross Domestic Product (GDP). We are aware of new GDP matric called GDP B that is motivated by the level of investments,” he said.
Kazako expressed concern over the way ICT companies give senior positions to foreigners which result into Malawians not developing the knowledge and experience in the sector.

“The habit of employing people from other countries other than Malawian in senior positions is also very evident here.” the Minister noted.

He said of the need for Malawians to be given opportunity to acquire adequate knowledge in the ICT sector.

“We reminded them that it is very important for them to ensure that there is a process of imparting knowledge and experience to Malawians,” Kazako said, adding that ICT companies should believe that Malawians could equally perform in senior positions the same way people from Bangladesh, India, Uruguay or Paraguay can do.

“We have people that have been working in this company since 1999 and they are always renewing their work permits and Malawians are down there,” he added.

Commenting on the issue of giving senior positions to foreigners, Globe Internet Chief Commercial Officer, Elias Imaan said the company would look and review the issue.

“We have taken note of the issue, obviously as an organisation it is something that we are going to review,” he said.

“This is something that we should be looking into and address immediately,” Imaan said while acknowledging that some positions are critical in terms of skill.