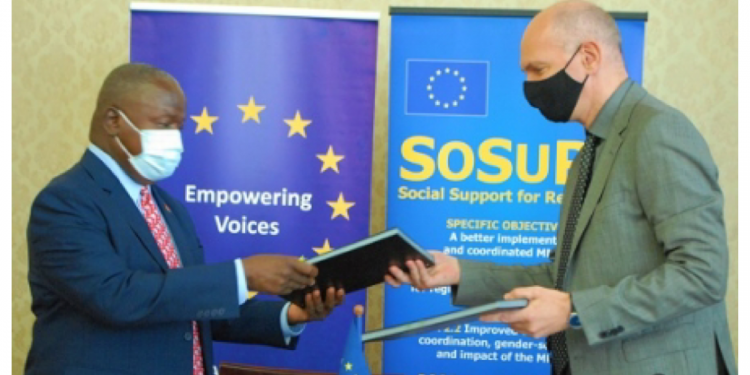 Speaking on Monday during a joint signing ceremony of the financial agreements for top up resources at Bingu International Convention Centre (BICC) in Lilongwe, the Minister of Finance, Felix Mlusu said the support would assist the government to implement both programmes.

“The financial support is vital because it will help us continue taking care of our children in schools and households that were affected by the Covid-19 pandemic by meeting their needs,” he said.

He said the agreements signed are in addition to the support government has already received from the European Union.

“As you are aware the Covid-19 has affected us negatively where the little resources that we had could not meet the demand of the two programmes, so the EU has been kind enough to help us with additional funding for the two programmes,” he said.

The minister also requested both Ministries of Health and Education to ensure that the resources should achieve the intended goals and reach the beneficiaries in various districts across the country.

Minister of Health, Khumbize Kandodo Chiponda thanked the EU for the additional support to the AFIKEPO Nutrition Programme and promised to make good use of it.

The EU Acting Ambassador to Malawi, Ivo Hoefkens said both programmes have delivered substantial and sustainable results hence continuing and increasing it in the context of the corona virus pandemic.

In 2017, the government of Malawi and the European Union initially signed the Financing Agreements for the Social Support for Resilience programme worth EUR 50 Million while the EUR70 Million financing agreements for the AFIKEPO Nutrition Programme was signed in 2018.

The overall objective of the Afikepo Nutrition Programme is to reduce food and nutrition insecurity in ten targeted districts of Mulanje, Thyolo, Chiradzulu, Salima, and Nkhotakota just to mention a few.